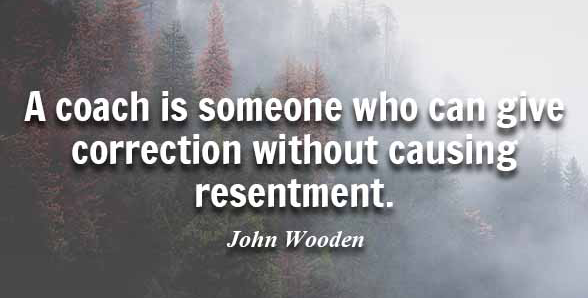 I consult with coaches on a daily basis and one of the simple but profoundly effective topics that I love to consult on is how to provide effective feedback to their athletes.  Providing feedback is a two-way street that entails the coaches being clear on what they want to communicate and knowing how to communicate and athletes receptive to feedback provided (that’s for another post at a later time).

I attended a webinar a while back on consulting with elite athletes. Here is a screenshot of one the slides during the presentation. I love the clean and simple illustration of the difference between providing challenging feedback versus criticizing.

Providing feedback to athletes in a manner that limits confusion is effective. It can dramatically enhance performance or the desired skill, as well as build trust in the relationship. Criticizing, on the other hand, often leaves the athlete confused and feeling more negative about themselves than before the interaction and increases the division in the relationship. 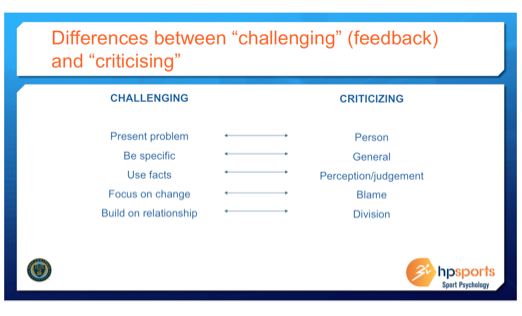 A main pushback that I most often get from coaches is that the feedback sounds “too soft,” and I get it! The criticizing approach has a long history in sports and is most often attached to making the athlete “mentally tough.” Coaches have often used it a means to motivate behavior while eliciting fear response from the athlete. Fear is a powerful underlying emotion. No athlete, or person for that matter, likes to feel like they are inherently wrong, blamed, isolated, targeted, or judged, but persistent criticism may create this pattern in the athlete. As a result, the athletes takes the criticism and attempts to execute it to avoid the negative consequences (negative reinforcement), which may later result in the athlete becoming less receptive to the coach and/or their performance will decline.

Challenging feedback on the other hand targets the behavior; NOT the athlete! There is a phrase used in parent behavioral training – “catch them being good!” This means have parents, or coaches for that matter, develop a habit of randomly verbalizing aspects of the athlete’s performance that the athlete is doing well or is accurately executing. For example, a coach observes the athlete’s during warm-up drills and randomly says “Good job on keeping those high knees it’s really paying off in your form!” or “Good job on keeping that effort and intensity throughout your sprint intervals”

Having a “challenging feedback” approach will take practice for some coaches. It may be a whole different style from when they were coached as an athlete. Just as we expect athletes to be able to take feedback and change, coaches must be willing to practice what they preach and change as well. Remember, it doesn’t make you “soft,” it makes you effective and efficient, and who doesn’t want that 😉

2) When giving real-time feedback, give no more than three short directives. An athlete can only focus on so much at one time. Our working memory is the “white board” of our brain and can only hold on to so much information. When you add more short-term information than is essential and necessary, something goes. Prevent this from happening by giving no more than is essential and necessary.

3) When giving feedback to one athlete, pull that specific athlete aside and refrain from “calling them out” in front of the group.

6) Look the athlete in the eye when giving feedback. There is nothing more powerful than eye contact and knowing that both people are being seen and heard. This builds relationship.

7) Give an authentic “Thank You.” Gratitude is powerful emotion and greatly enhances relationships. “Thank you” to the athlete acknowledges/validates their part in the feedback process.

Dr. Petruzzelli is a clinical sport psychologist, triathlete, and certified mindfulness meditation teacher located in Sacramento, California. She works with elite athletes and sports teams across the country. She is a competitive athlete and enjoys practicing yoga, spending time with her family, and traveling. View all posts by Dr. Gloria Petruzzelli